Find Out How to Become a DuctPro 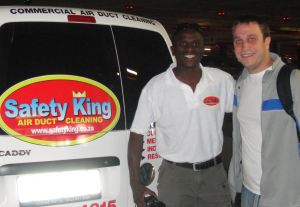 In one sense, this isn’t so unusual. Since 1985, Safety King has been conducting air duct cleaning training courses from its headquarters in southeast Michigan. Most of the students learning to properly clean air ducts and to run an air duct cleaning business were people from other parts of the US and Canada. Some, though, came to us from overseas specifically for this training. We’ve trained people from Singapore, Australia, the Virgin Islands and elsewhere. This trip to South Africa, however, is the first time Safety King has traveled overseas to conduct air duct cleaning training.

Owen Mutetwa, a Zimbabwean living in Johannesburg, has a carpet cleaning business operating in southern Africa and decided last year to move into air duct cleaning. In researching possibilities, Owen found our website and decided we had the kind of company he wanted to run in his region. He contacted us by email to see if he could arrange to launch a Safety King franchise in Johannesburg. What we suggested instead was for him to become one of our Licensed Affiliates, with a consulting contract that would take him through preparation, training, launch and early growth of his business. Late in 2012, Owen signed the Licensed Affiliate agreement and created Safety King Southern Africa in Johannesburg.

Since then we have built a website for his new venture (www.safetyking.co.za), worked with Owen by phone, Skype and email on choosing, ordering and setting up equipment for his new business, and sent a certified trainer to Johannesburg to train him and his employees, none of whom had ever cleaned air ducts before.

The Ductpro trainer we sent was one of our certified technicians, Christopher Nevens, ASCS, who has 13 years of experience cleaning air ducts here in Michigan for Safety King. In recent years, Christopher has also been one of our certified master trainers, conducting air duct cleaning training courses here in Utica, Michigan, for students from all over the US and Canada.

Because of the unique nature of this trip, and because Chris and his wife Lauren are newlyweds, we also sent Lauren along on the trip at our own expense. Neither of them had ever been any further away from the US than Windsor, Ontario, so it represented an unusual opportunity. Of course it also meant a series of exotic vaccinations for the two of them, and very, very long airplane rides both ways, with all the disorientation that crossing seven time zones and changing hemispheres brings with it.

Owen Mutetwa reports that the training went very well indeed and he is proceeding with the launch of his new air duct cleaning business. Here are his words from an email message he sent at the conclusion of the training.

“Chris did a splendid job teaching us all the theory and we could visualize how we can clean ducts. We had formal sessions and informal sessions because whenever I was with Chris we discussed ducts. Chris was brilliant and highly passionate when discussing and delivering training. Thank you for sending him down!”